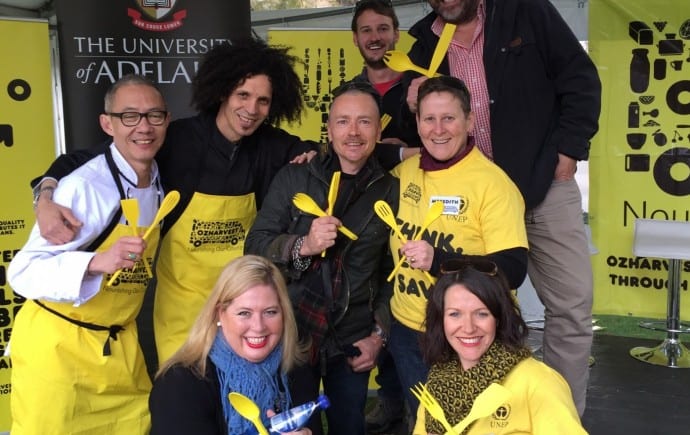 To capture the key points made during the Think.Eat.Save panel discussion in Adelaide, we asked OzHarvest casual driver and journalism student Simon Delaine to write a blog for us. The key message: we need to respect our food more!

The panel discussion was a way to get people to think about the intricacies of food waste and it was captivating to listen to five industry experts talk about something they are so passionate about; food. A point which came up over and over in the discussion was the fact that we need to respect our food more. No food needs to be thrown away. As Tze Khaw said, the worst case scenario for food is for it to be fed to the worm farm. Richard Gunner (the resident meat expert) mentioned that there is a lot of flavour in the bones of animals, which can be used to make stock. Meat is understandably more important than other categories of food when it comes to waste, since an animal’s life is involved. So learning how to make use of as much of the body as possible will go a long way in showing respect for the animal and reducing waste.

Nick Thwaites (the resident vege expert) work revolves around getting kids involved in growing their own food. He said education can produce lifelong benefits, especially around food waste.

“If a kid learns what it takes to grow food, then they’re more likely to respect the food” he said.

This isn’t specific to kids however, and it seems much food wastage can be avoided if people learn where their food comes from and stop taking it for granted.

Being clever and smart about food preparation was also a key theme of the discussion. Simon Bryant said that we need to make plans, ignore the trends and go speak to our grandma for advice instead of the mainstream media. In summary, make a plan for the week, stick to it, and keep things simple.

Simon also brought up a very interesting point on the use of best before and use by codes. He said the codes are outrageous and that we should put our five senses to use instead. This was another point which came up over and over. We need to be more accountable for our own health. Bar codes are obviously a necessity in the minds of food producers but we, as consumers, shouldn’t rely solely on them to identify whether the food is good or not. Use your senses, give it a sniff.

Another topic which came up was that we simply don’t need to eat all that much food. Tze said our bodies don’t need that much protein. We only need less than 100g per day. So when you compare this to some restaurant servings, it’s easy to see we often have too much. Hayley said that when she goes out to restaurants, she often shares meals, instead of having one each.

To wrap up the discussion, three final tips from the panellists were: