A year ago Vikings Group pledged a year of fundraising for their Charity of the Year, OzHarvest Canberra, and earlier this month announced that the Group raised $63,385.

After two successful years running the program, Vikings Group CEO Anthony Hill says he is proud of the contribution the group has made to the community in such a short period of time.

“The team has once again surpassed expectations, going above and beyond to achieve an incredible fundraising goal for OzHarvest. It’s been a pleasure working alongside Dave and the OzHarvest team,” he says. “We’d also like to thank the Vikings Group Members and the Canberra community, we couldn’t achieve this result without their support.”

Charity of the Year aims to support Canberra charities through fundraising and awareness raising activities, and by building lasting relationships with charities in the region.

“This was an important partnership for us, we always try to be conscious of waste and felt we could do more to support people in our community who might not always have regular meals,” Anthony said.

On average, Australians throw away $8 to $10 billion of food every year, which equates to about $1,036 worth of groceries a year for one household. With these statistics there are still two million people across Australia who rely on food relief every year.

OzHarvest ACT Territories Manager, Dave Burnet, is grateful for all the support over the last 12 months.

“This donation will help us deliver over 120,000 meals! We are very grateful for Vikings’ support and its contribution to the Canberra community,” Dave says.

We are thrilled to announce a brand new and very generous partnership between The Green Shed and OzHarvest Canberra.

Our friends at The Green Shed run a number of services focused on re-use, recycle and re-purpose. One of them is Charity Cars, a free-service collecting unwanted vehicles for resale or sale as scrap metal. OzHarvest Canberra has been chosen to receive 20% of all vehicles’ sold or scrapped value to help continue the important work they do in the Canberra region.

How does it work?

Charity Cars will collect any vehicle for free anywhere within the ACT and surrounds if the vehicle is accessible and has all four wheels; they also require ownership to be signed off at the time of collection… it’s as easy as that!

Regardless of the method of disposal 20% of the vehicle’s worth will be donated directly to OzHarvest Canberra to help continue their invaluable work within the Canberra Community.

Charity Cars is a business initiative designed to raise revenue for local charity in an innovative and responsible way. They also seek to promote responsible disposal of unwanted motor vehicles in the Territory as well as to generate sustainable, local employment.

Charity Cars is owned and managed by The Green Shed (TGS), which currently operates out of the reuse and recycling facilities at the Mugga Lane and Mitchell Resource Management Centres in the ACT. TGS has a proven record of community engagement throughout the region. Over the last four years TGS has donated over $610,000 in cash donations to local charities. On top of this they donate regularly to Canberra’s schools and local community enterprises.

Charity Cars have also kindly donated a vehicle to assist our Canberra team in their day to day endeavours that help nourish the local community. Meet Manuela, the newest edition to our fleet. Thanks Charity Cars and the Green Shed! 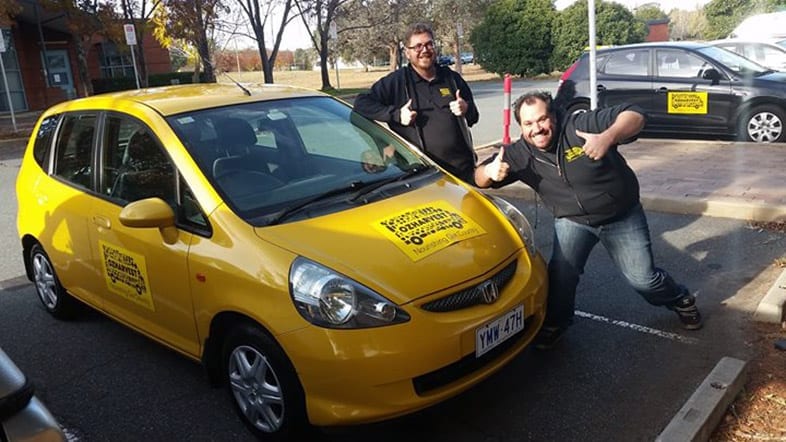 Vikings Group has pledged to raise $60,000 for OzHarvest over the next 12 months, as well as donate 1000 cans of non-perishable food. The pledge will support OzHarvest in their mission to eliminate hunger and educate the Canberra community about food waste and how to prevent it.

OzHarvest is Vikings’ second Charity of the Year, following on from Red Nose. After a successful first year running the program, Vikings Group CEO Anthony Hill is trilled to continue the growing tradition.

“Providing any help to local charities has been a pleasure for Vikings, we’re grateful to make any difference we can. We chose OzHarvest as our new Charity of the Year because it contributes greatly to the local community, and also touches on key issues such as hunger and food wastage.” Anthony says.

The program will see a variety of initiatives run throughout the year including food drives, Vikings restaurant food donations and game day soup kitchens.

“This is more than just a one off donation, it’s about building a lifelong and strong partnership with a local charity.” Anthony says.

On average, Australians throw away $8-10 billion of food every year, which equates to approximately $1,036 worth of groceries a year for one household. At the same time, there are still two million people across Australia who rely on food relief every year.

OzHarvest operates across Australia, and since 2004, has saved more than 20,000 tonnes of food from waste. Its food rescue initiatives have supported over 900 charities and delivered 60 million meals to those in need.

Dave Burnet, OzHarvest ACT Territories Manager, is grateful for the opportunity to work with Vikings Group and looks forward to the year ahead.

“This is a great opportunity to partner with a fantastic organisation. Vikings’ history in supporting charities such as ours gives us hope that through this partnership we can continue our work amongst the local community, and across Australia,” he said.

We broke our own record again!

In March the OzHarvest Canberra team rescued over 30,000 kg of great surplus food. In April we rescued even more… 34,000 kg!

We have increased our reach and now assist nearly 70 agencies and refuges in the region. If our food rescue totals keep climbing we might even be able to get more charities off our waiting list and receiving valuable rescued food!

Thank you Canberra, Queanbeyan and Yass!

If you or your workplace would like to help OzHarvest Canberra deliver great, free food to charities in our own backyard please call us on 6247 6173 during business hours or email our team at [email protected]

The team from Accenture joined us for Cooking for a Cause recently at 3seeds Cooking School located in the Fyshwick Markets. Chef and owner Andrew Haskins had the Accenture crew peeling and chopping, slicing and dicing, frying and baking with quality rescued produce and they ended up cooking a mountain of meals for us to deliver to local Canberra charities.

It was a lovely afternoon and it was clear the Accenture staff (some of whom had never met!) enjoyed working together to help the community (and have a huge amount of fun!).

Thanks Accenture and thank you Andrew and Catherine Haskins from 3seeds for helping us feed people in need!

For those interested in participating in a cooking class with purpose and cause, please contact us at: [email protected]

Our team hit the ground running in late 2014 and it has been incredibly busy!

Around 150,000 kilograms of beautiful food has been rescued in Canberra, Queanbeyan and Yass to date.

We now visit around 60 local charities and refuges in the region and to say they are stoked to receive lovely fresh free food is an understatement!

Our heartfelt thanks to all of our supporters who have donated time, funds and food.

You have helped so many in your own backyard!

If you want to get in touch to donate food, time or funds please call us on 02 62476173 and speak to our wonderful team!