The fight against food waste has reached a major milestone as OzHarvest Newcastle delivered the equivalent of over five million meals to Hunter residents, using over 1.7 million kilograms of rescued food.

Chris Rowntree, OzHarvest Newcastle City Manager, explained how this staggering amount was delivered in eight years, thanks to the tremendous support from food donors and sponsors across the region.

“Food rescue operations have grown steadily since OzHarvest Newcastle commenced in 2010. Last year with the support of nib foundation, a third van was added to the fleet which helped us deliver our five millionth meals sooner than we expected,” said Mr Rowntree.

“With over 100 regular food donors we are collecting and delivering on average 6,500 kilograms of nutritious food every week. We are supported by local businesses and sponsors who are as passionate about preventing quality food going to waste and delivering it to people in need as we are,” he said.

nib foundation, Executive Officer, Amy Tribe said they were proud to have helped increase the capacity of OzHarvest in the Hunter region to meet an ever growing demand for food relief.

“Each day thousands of the Hunter region’s most vulnerable residents are able to enjoy a meal thanks to the incredible work of OzHarvest Newcastle and its team of volunteers,” Ms Tribe said.

“It’s an amazing local success story that we’ve been proud to support since its establishment in 2010. We look forward to being a part of their ongoing growth as they continue to help improve the health and wellbeing of those most at risk in our community,” she added.

Australians throw out an estimated four million tonnes of food each year costing the nation $20 billion annually. OzHarvest and their 3,000 food donors nationwide are playing a vital role in addressing this issue.

OzHarvest Newcastle recently added a third food rescue vehicle to our fleet thanks to our friends at NAB Business Banking & AHG, Australia’s largest automotive group. OzHarvest Newcastle has delivered the equivalent of nearly half a million meals to those in need in Newcastle and the Hunter region and the new van will allow the team to deliver even more.

AHG donated $40,000 and the NAB staff held two fundraising events in support of OzHarvest donating $35,000! A massive thank you too to George at Steve Koulis Smash Repairs who painted the new van OzHarvest yellow and who has painted all of our vehicles over the years free of charge! 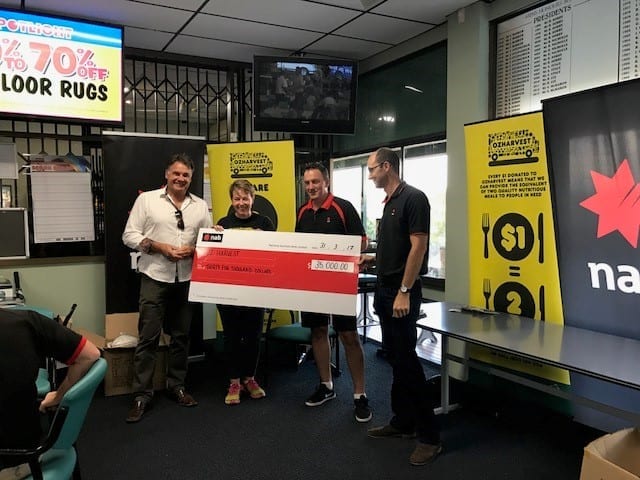 $103,955.00 was raised at our Seven Successful Years of OzHarvest in Newcastle fundraising luncheon! OzHarvest Newcastle Manager, Monique Maguire, and the team were overwhelmed by the support and generosity in the room at the sensational Merewether Surfhouse. The funds will help OzHarvest Newcastle continue its work rescuing surplus food to feed local people in need.

Thank you to the amazing chefs Ryan Baird of Merewether Surfhouse and Parry St Garage; Leigh Boys from Scratchleys and Battlesticks At Scratchleys; Troy Rhoades-Brown from Muse Restaurant and Muse Kitchen; Cameron Cansdell from Bombini and Fish Dining; and Gareth Williams from Restaurant Mason.

Thank you to all of our guests for making the event a huge success and lots of fun. See you next year!

Hunter Water recently introduced a Charity Partnership Program where three local organisations are voted by staff to participate. OzHarvest was chosen as the first charity for 2017. You may have noticed our logo and messaging on your last water bill!

As part of the program, the staff at the various depots held OzSizzle BBQ’s and for every dollar donated by staff, Hunter Water matched it. We would like to thank Hunter Water, Mel Hole and all of the staff for the amazing support we received and for the fabulous gifts that were donated.

We received a brand new marquee, two tables, two chairs, two hydration stations and two hand washing stations plus a donation that will allow us to deliver nearly 3,000 meals to locals in need.

We are thrilled to announce that thanks to the generosity of the attendees and sponsors, more than $26,000 was raised at this year’s event, allowing OzHarvest to deliver the equivalent of 52,000 more meals to people in need in the local community. 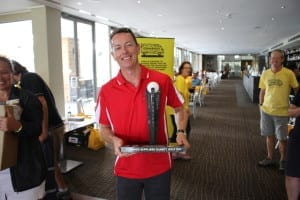 Thank you to our wonderful volunteers who gave their time generously and ensured the day ran smoothly. Thank you to Renee, April and Sandra from WK Marble & Granite and Jo and the girls from Polytec who sold lots of raffle tickets on the day. Thank you to David and Bob Wilson from AGHA Golf and Promotional Products for all of your assistance in the lead up and on the day. A special thank you to Mike Rabbitt for once again doing an incredible job as MC and auctioneer. Mike is amazing at getting the crowd to respond and be at their most generous!

Thank you to Edsteins, Hafele, Euroform and Polytec for your generosity and continued support over the years. It is a pleasure to work with you all.