Rockpool Foundation and Neil Perry have furthered their commitment in the fight against food waste by donating a brand new refrigerated van and driver to OzHarvest, Australia’s leading food rescue organisation, helping reduce the amount of good food going to landfill.

The generous donation will allow OzHarvest to rescue an additional 500 kilos of surplus food every day, which equates to around 400,000 meals a year to help feed people in need.

The OzHarvest and Rockpool Foundation van will include a daily run to the airport to collect surplus food from domestic flights at the Qantas Catering Centre, which will then be delivered directly to charity agencies in the local area.

OzHarvest CEO and Founder, Ronni Kahn said every kilogram of food that can be rescued saves perfectly edible food from ending up in landfill, which not only protects the environment but helps make a positive difference to the lives of those less fortunate.

“When I called Neil Perry twelve years ago to ask him to donate food to my start up charity, he immediately said yes. I’ve called him many times since then, and he has always risen to the challenge.”

“OzHarvest is totally philanthropically funded and relies on the support of organisations like Rockpool Foundation to keep the wheels turning, in this case literally. We love that Neil and his Foundation are industry leaders in giving back so significantly to the community.”

Neil Perry is a passionate champion of the cause and Rockpool Foundation is dedicated to supporting community based charities helping to change people’s lives for the better.

“Ronni and her OzHarvest team do an outstanding job and have such a positive impact on so many peoples’ lives, and we are proud that via Rockpool Foundation, we are able to give them greater resources to deliver more food to more people in need,” said Neil.

The Rockpool Foundation vehicle joins the fleet of 37 OzHarvest vans collecting over 87 tonnes of rescued food each week from more than 2,000 businesses including supermarkets, restaurants, cafes, hotels, retailers, airports and food outlets. The quality surplus food is then delivered to more than 900 charities helping to make a positive difference to the lives of men, women and children across Australia. 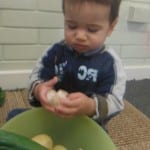 Since our friends Foodbank SA opened the new Fruit and Vegetable facility at the Adelaide Produce Market, there has been a growing collaboration between our two organisations.

Twice a week Foodbank delivers beautiful produce to our premises in Goodwood, to distribute to our network of charities – you can see a picture above of 800kg of oranges delivered yesterday!

“Working together in this sector is so important”, says Hayley, State Manager at OzHarvest in Adelaide, “it’s just wonderful that we can share resources with Foodbank SA and together fight food waste and support those people in our community that need it most, while reducing carbon emissions at the same time.”

“It’s a fantastic collaboration that we are incredibly grateful for,” said Hayley. “We hope we will keep on working together on feeding the people in need, in this world of plenty.”

You can read more about Foodbank SA here.

Since we welcomed ‘Marigold’ to the OzHarvest family of food rescue vehicles just under two months ago, we have already delivered 50,000 meals to people in need in the area South of Adelaide. Such a great start!

We now deliver food to 14 charities down South, including the Salvation Army in Noarlunga, Aldinga Beach Children’s Centre and Re-Engage Youth Services in Christies Beach.

Thank you so much to all the food donors supporting us in preventing food waste and spreading goodness! Some of our fabulous donors are Colonnades Shopping Centre retailers, Home Grain Bakery, Fruit Loopz, Moana Heights IGA Fresh, Serafino and so many more. Without your support we couldn’t deliver so much goodness to people in need.

The launch of the third van on 28 August happened short after we celebrated a huge milestone of delivering the equivalent of 2 million meals in central and northern Adelaide. The addition of Marigold enables us to provide a truly city-wide food rescue service and a new milestone is likely to follow shortly!